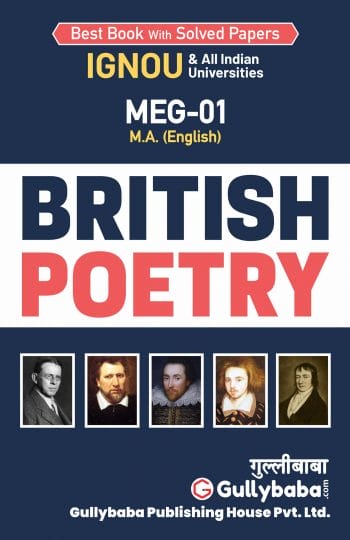 Get Good Marks in your MA English Programme in the Term-End Exams even if you are busy in your job or profession.

Block 2 - Undertaking A Study of Spenser

1. Explain any two of the excerpts of poems given below with reference to their context: (i) But hail thou Goddes, sage and holy, Hail divinest Melancholy, Whose Saintly visage is too bright To hit the Sense of human sight; And therefore to our weaker view, Ore laid with black staid wisdoms hue. (ii) My love is now awake out of her dreams (s), and her fayre eyes like stars that dimmed were With darksome cloud, now shew theyr goodly beams More bright then Hesperus his head doth rere. (ii) All human things are subject to decay, And when Fate summons monarchs must obey. This Fleckonoe found, who, like Augustus, young Was called to Empire and had governed long; (iv) Damn with faint praise, assent with civil leer, And without sneering, teach the rest to sneer; Willing to wound, and yet afraid to strike 2. Draw a ccomparison between the Epithalamion and the Prothalamion as wedding songs. Answer with suitable examples. 3. Who were the Pre- Raphaelites and what were the characteristics of the movement? Critically appreciate any one poem of this age/movement. 4. What attitude to Nature does Coleridge express in the Ode to Dejection? In what ways does this attitude differ from that of Wordsworth and from his own earlier attitude? 5. What was the Reformation? What relations can you identify and trace between the Renaissance and the Reformation. 6. Philip Larkin has been called an ‘uncommon poet of common man’. Would you agree? Explain with suitable examples.

1. Explain with critical comments any two of the following passages with reference to their contexts: (a) Where was heard the mingled measure From the fountain and the caves. It was a miracle of rare device, A sunny pleasure-dome with caves of ice! (b) We sat grown quiet at the name of love; We saw the last embers of daylight die, And in the trembling blue-green of the sky, A moon, worn as if it had been a shell Washed by time's waters as they rose and fell, About the stars and broke in days and years. (c) Weep no more, woful shepherds, weep no more, For Lycidas your sorrow is not dead, Sunk though he be beneath the watery floor. So sinks the day-star in the ocean bed, And yet anon repairs his drooping head, And tricks his beams and with new spangled ore, Flames in the forehead of the morning sky: So Lycidas sunk low, but mounted high, Through the dear might of him that walk'd the waves. (d) When the stars threw down their spears, And water'd heaven with their tears, Did he smile his work to see Did he who made the Lamb make thee? 2. Write a critical note on Chancer's art of portraiture in The General Prologue. 3. Consider Herbert as a religious poet. 4. Comment on the opposition of art and life and youth and old age in 'Sailing to Byzantium'. 5. Comment on the themes of death and suicide in the poetry of Sylvia Plath.
Buy MEG-01 Assignment

Why Download MEG-01 Materials and What is its best use?

To attend IGNOU MEG-01 Term-End Examination, you must first submit your Assignments to the university and it is possible from the MEG-01 study material. You can solve all necessary Assignments using Help Books. This will help in gaining good marks.

All best wishes with our efforts that you do not meet any obstacle before attending examinations next year. You can pass the MA English Programme Annual Exams with a good grade using Books/Materials from any one place at home or anywhere else!

ALL THE BEST!!!
Team GullyBaba