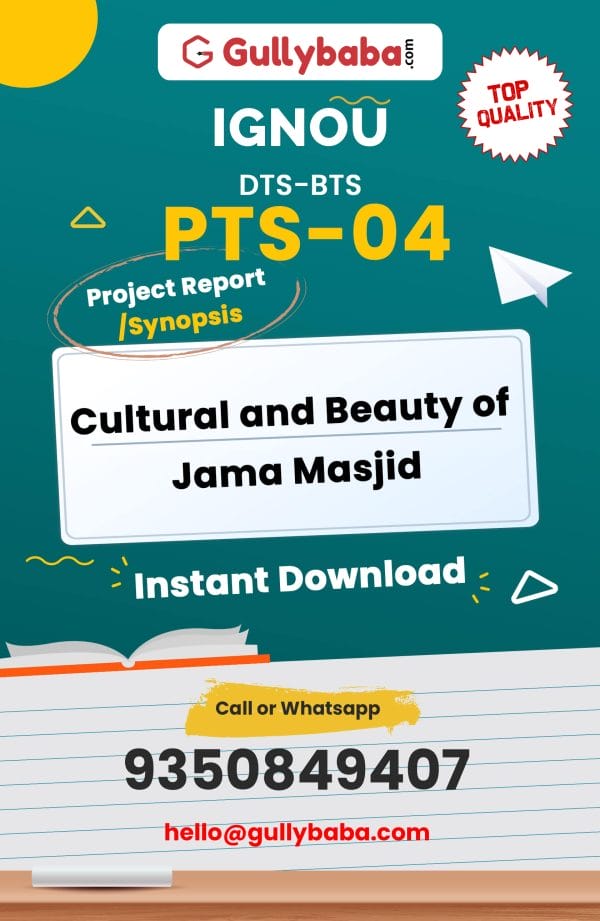 #1 Best Selling IGNOU Project/Synopsis in All Available in Market

Only 4 left to stop selling the same Copy! people are viewing this, and 7 recently purchased it
450 900
Are You Looking for Customized Project Report / Synopsis?
Buy PTS-04 Customized Project
Any Doubt? WhatsApp or Call: 9312235086
Instant Download in Next 2 Minutes after Payment.

About PTS-04 Project – Cultural and Beauty of Jama Masjid

The Masjid-i Jahān-Numā, commonly known as the Jama Masjid of Delhi, is the principal mosque of Old Delhi in India. Commissioned by the Mughal Emperor Shah Jahan, builder of the Taj Mahal, and completed in the year 1656 AD, (Source: en.wikipedia.org) it is the largest and best-known mosques in India. It lies at the origin of a very busy central street of Old Delhi, Chandni Chowk. The later name, Jāmi' Masjid, is a reference to the weekly Friday noon congregation prayers of Muslims, which are usually done at a mosque, the "Congregational Mosque" or "Jāmi' Masjid".

Here are the files that you can download for this Project.